Greetings from Machu Picchu….wish you were here! 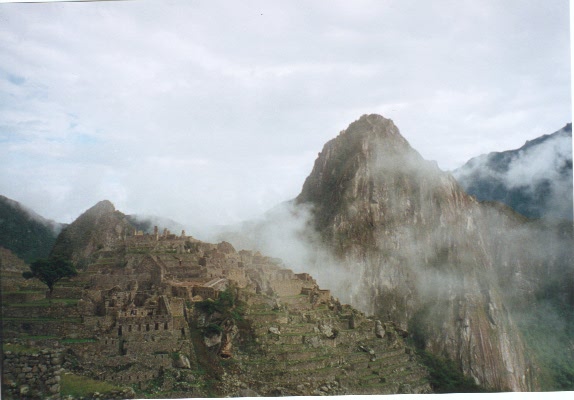 Picture of the Ancient City of Machu Picchu taken in November 2001.

The four-day trek on the ancient Inca Trail in the Andes Mountains of Peru is one of the best hike’s in the world.  Over the course of 26 miles/43 kilometers, trekkers experience the Andes at its finest going through sensational and varied mountain terrain, cloud forests, and sub-tropical jungle while walking on the ancient Inca paving stones of the trail.  The trek is a journey of a lifetime which ends on the fourth day at dawn (when no tourists have arrived yet by train) at the mysterious, stunning “Lost City of the Incas”.  Built around 1450 at the height of the Inca empire, the city was abandoned and not discovered until 1911 by Hiram Bingham, an American Historian.  Since its discovery, Machu Picchu has become open to scholars and eventually tourism which has paid a heavy toll on this UNESCO World Heritage Site.   The Peruvian Government  is trying to control tourism so amazing ruins do not get destroyed yet this is an extremeply difficult task for an impoverished country.   One would hope that the ruins of Machu Picchu remain unpolluted and pure so future generations can marvel at one of the greatest wonders and mysteries of the world.  If you have a chance to see it, go now.